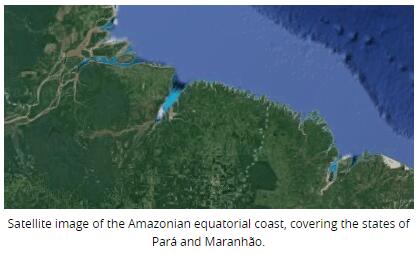 With about 9200 km, the Brazilian coast is bathed by the Atlantic Ocean and can be divided into six major geomorphological, landscape and phytogeographic sectors. This division was only possible thanks to the carrying out of geological studies and the use of aerial photos and satellite images.

The Amazonian equatorial coastline extends over lands in three Brazilian states: Amapá, Pará and Maranhão, in an extension of 1850 km (this measure includes all coastal indentations). Its specificity is the huge volume of water in the Amazon basin and, because of that, it presents countless exceptional landscapes.

The presence of large mangroves in the area is remarkable, with specific ecosystem characteristics, in an intricate mosaic of dry lands and floodplains.

Northern coast of the Northeast

Restricted to the lands of Ceará, Rio Grande do Norte and northeastern Maranhão, the northern coast of the Northeast extends over a strip of 1250 km and, as it is dominated by the hot and dry climate, it constitutes the great landscape exception of the Brazilian coast. This area is said to be the “place where the semi-arid backlands reach the sea”.

At its extremities there are two important transition domains: the Lençóis Maranhenses and the delta of the Parnaíba river .

The Lençóis Maranhenses are marked by the presence of two types of sedimentary deposits forming two subsectors on the coast of Maranhão.

One of them extends from the border with the state of Pará to the Gulf of Maranhense and is marked by extensive mangroves in saline coastal mudflats, whose support is given by the presence of clayey deposits with marine salinity. Another is located between the Maranhense Gulf and the Parnaíba Delta and is an area where there are deposits of sandy sediments generated by wind work in the region.

Potentially, this area can be used for ecotourism, which must be very well planned to avoid environmental impacts.

The eastern coast of the Northeast includes lands in Rio Grande do Norte, Paraíba, Pernambuco and Alagoas.

The landscape is marked by the presence of cliffs or coastal plateaus and, consequently, by narrow beaches.

The climate is hot and humid, with annual rainfall exceeding 2 thousand mm; the original vegetation consists of dense forests with great biodiversity.

In the states of Alagoas and Pernambuco, since the colonial period, this vegetation has been removed to make way for the planting of sugar cane.

There are sandstone and coral reefs that separate the beaches from the open sea.

The east coast of Brazil begins in the delta of the São Francisco river , on the border between Alagoas and Sergipe, and extends to the delta of the river Doce, in Espírito Santo, occupying about 1700 km.

It is in this region that the Discovery Coast is located – the coastal stretch reached by the Caravels of Cabral and where Portuguese colonization began. It is characterized by the presence of small bars formed by rivers originating from the plateau of South Bahia.

The entire coastline is formed by extensive strips of sandbanks with large areas of productive coconut groves .

It is in this strip that the Todos-os-Santos bay appears : after a long stretch of low coasts, the wide and deep bay that enchanted the colonizers opens up. It constitutes an excellent natural berth and, due to its shape, was seen as an excellent area for territorial defense. Its indentation penetrates 80 km in the continental lands and presents a coastline of 300 km, forming a small gulf with three bays.

According to Sunglassestracker, the southeastern Brazilian coast is the most rugged and diversified coastal sector in the entire country. It extends for 1,500 km, covering land from the border of Espírito Santo with Rio de Janeiro to the limits of the states of Paraná and Santa Catarina.

To the north it has narrow beaches intersected by boards; these are gradually replaced by sandbanks that form sandy ridges and give rise to coastal lagoons in the Cabo Frio region of Rio de Janeiro (Região dos Lagos).

In the state of São Paulo, the slopes of the Serra do Mar follow the entire coastline, forming countless beaches. It is in this area that the most rugged and jagged coastline in Brazil is found.

Extending towards the south, it reaches the narrow strip of land along the coast of Paraná. This feature makes the coastal set visible only in enlarged satellite images.

The south coast begins when the steep areas covered by the Atlantic Forest on the Paraná-Santa Catarina border end; from there, the coastal strip reaches Rio Grande do Sul and gradually loses its steep character.

Thus, faulty blocks appear in the landscape on the coastline, forming the second most jagged stretch of the entire Brazilian coastline and marked by the presence of inlets, dunes, lagoons and even hills formed by lava in the so-called “Serra Geral”.

It is on the coast of Rio Grande do Sul that the largest lagoon complex in South America is found, consisting of the Patos, Mirim and Mangueira lagoons. Such formation arose from the retreating movements of the sea that ended up forming a channel that connects these wetlands to the Atlantic Ocean.