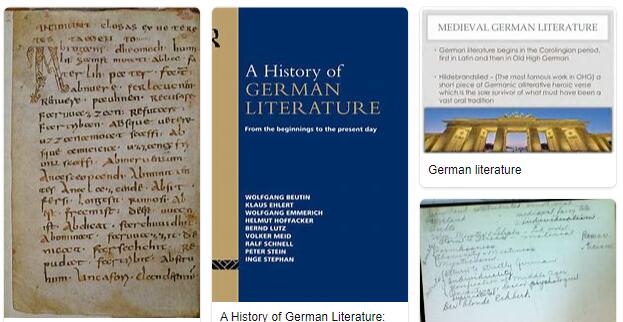 In the late Middle High German period, the courtly traditions were continued and new forms of secular and sacred literature were developed from older approaches, with the language gradually – differing from region to region – more and more distancing itself from Middle High German and adopting the early New High German forms. In the aftermath of the courtly epic, the palette ranged from minneallegories (Hadamar von Laber, “The Hunt”, around 1340), rhyming speeches, etc. to adventure compilations such as Ulrich Füetrer’s “Book of Adventures” (between 1473 and 1478).

In the narrative literature there was a new approach by Heinrich Wittenwiler with his parodistic epic »The Ring« (after 1400), while Hermann von Sachsenheim continued the allegorical storytelling (»Die Mörin«, 1453, created for the Swabian court of muses of Archduchess Mechthild in Rottenburg). The translations of the prose versions of French Chansons de Geste by Elisabeth von Nassau-Saarbrücken opened up a new form of reception of chivalric literature. These translations became the basis for the popular books that spread after the invention of the printing press which were joined by the Schwank collections popular in the late Middle Ages (»Pfaffe vom Kalenberg«, »Eulenspiegel« and others). At the same time the first print of Middle High German epics appeared (“Parzival” and “Younger Titurel”, 1477).

The didactic-scholarly tendencies that became more and more pervasive in poetry (in part already with the master of the floral style, Heinrich von Mügeln, in the mid-14th century at the Prague court, and with Hugo von Montfort) pointed to the Meistersang, which took place in the 15th century Century fully developed in the cities (Mainz, Nuremberg, Strasbourg, etc.). It was characterized by form schematism and bourgeois teaching (Muskatplüt, M. Beheim, H. Folz). The first masterly singing school is said to have been founded in Augsburg in 1450. Oswald von Wolkenstein once again used the forms of minnesong for his passionate love songs, which in their joie de vivre already point to the Renaissance.

In the late Middle Ages there was a flood of spiritual and popular theological literature in verse and prose; significant are v. a. the first Bible translations into prose at the end of the 14th century, which superseded the rhymed world chronicles and history Bibles and were spread with the invention of the printing press. The experience of the plague (middle of the 14th century) brought new impulses to pastoral literature (Geißlerlieder, death dances). In addition to the spiritual games, carnival games have also been popular since the end of the 14th century (H. Rosenplüt and H. Folz). – The high point of the late medieval prose is considered to be the argument between the Ackermann and the death (»Der Ackermann aus Böhmen«, around 1400) by Johannes von Tepl, in the form of the disputation with high rhetorical art and existential weight. He drew from Latin literature as well as other authors of the time: Niklas von Wyle (“Translatzen”, 1478), Heinrich Steinhöwel(“Apollonius von Tyros”, 1471) and the canon Albrecht von Eyb (“Marriage Booklet”, 1472; “Spiegel der Sitten «, published in 1511). Bourgeois-practical thinking was accommodated by natural history-medical writings of all kinds, educational books (table breeding) and travelogues.

The diversity of German and Latin literature of the 16th century corresponded to the theological, political and social conflicts that arose when people broke away from medieval ties. Strong impulses for new forms came from humanism, theReformation and the increasing urban bourgeois readership.

The first third of the century was marked by the struggle of the humanists against scholasticism and monasticism, culminating in the satire of the “Epistolae obscurorum virorum” (“Dark Men Letters”, 1515-17). With his translation of the Bible, his church songs, sermons and tracts, Luther made a significant contribution to the establishment of a language that broke through communal German, regional and class boundaries.

The humanists strived for the renewal of antiquity, they also drew attention to early German history with cultural patriotic intentions (in 1500 K. Celtis published the works of Tacitus). Mystical currents opposing Luther were based on theology and philosophy of history (S. Franck).

A similarly intensive replacement of medieval forms can also be seen in narrative literature. In 1494 S. Brant published the last comprehensive world mirror with his “Ship of Fools” in verse.

At about the same time, an independent prose novel, the “Fortunatus” (published in 1509), was created, in which fairy tale motifs were linked with practical bourgeois morality. The denominational disputes were fought out in popular prose filled with crude and comical language. The v. a. humorous, coarse satire cultivated by J. Fischart. The affinity of prose and bourgeois thinking was evident in the realistic portrayal of people, milieus and conflicts and in practical, life-related morality in the novels by J. Wickram (including “Der Junge Knaben Spiegel”, 1554; “Der Goldtfaden”, 1557). The two allegorical-fabulous heroic autobiographies of Kaiser (only partly written by himself) took up court themes again Maximilian  I. on (»Weißkunig«, created around 1516, printed in 1775, and »Teuerdank«, 1517). It was also the emperor, who was interested in literature, who commissioned the manuscript of the “Ambraser Heldenbuch”, which was published for several, e. Some important Middle High German works are the only tradition (e.g. for the »Kudrun« epic). Old subjects were carried on in the Volksbuch (as in the »Gornnten Siegfried«, first print only known from 1726), popular narratives were summarized in cycles (»Till Eulenspiegel«, 1515; »Die Schildbürger«, 1598), from many sources and anecdotes, The “Historia von D. Johann Fausten…” (1587) arose from legends and quirks. In the popular fiction literature, too, prose replaced verse (J. Pauli, »Schimpf und Ernst…«, 1522; J. Wickram, “Rollwagenbüchlin”, 1555, and others). The translation of the Spanish “Amadis von Gaula” (German 1569–94 in 24 volumes) heralded the baroque novel. 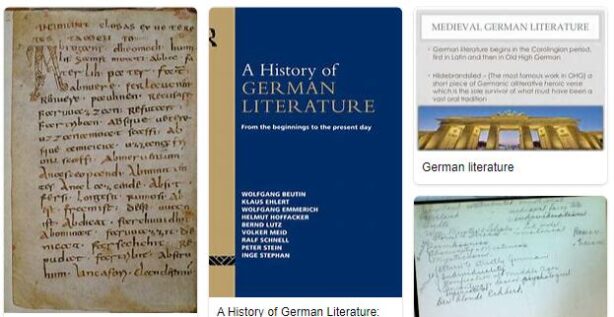