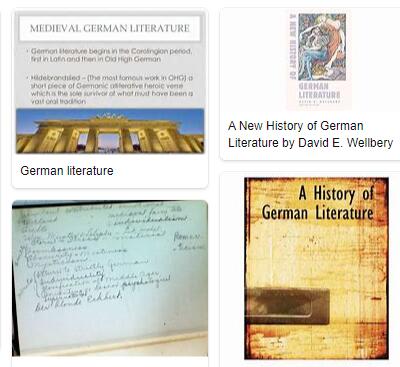 The greatest lyrical achievement of the century lies in the Protestant hymn created by Luther. In addition, the Meistersang and the society song lived on until the end of the century, partly on a popular basis. It was not until the last quarter of the century that a new type of song, the so-called Villanelle, was introduced from Italy by J. Regnart’s “Kurtzweilige teutsche Lieder” (1576–91).

For the literature of the 17th century, the term baroque has become common, an 18th century term that was initially applied in a thoroughly derogatory sense to art and taste, to denote the deviation from the norm, the stylistic inconsistency and irregularity. The older literary and cultural historiography (including G. E. Lessing, J. Burckhardt, W. Scherer) saw the literature of the baroque as a literature of swelling, proliferating language, a literature of decay. It was not until the beginning of the 20th century that it was given a more historically fair assessment, which recognizes the artistic independence of this era in its tense coexistence of opposites.

The political and intellectual space was determined by the division of Christianity, the confessional tripartite division of Europe; the sufferings of the Thirty Years’ War shaped everyday experiences. Following the example of French centralism, cultural life gathered at the courts, and courtly culture radiated into bourgeois culture.

The ideologues of the baroque concept of order were the scholars; they increasingly used the vernacular, which in the second half of the 17th century developed into the New High German written language. The awareness of language renewal was the basis of the many defenses of the German language; in competition with ancient models, the aim was to ennoble the vernacular, which was perceived as raw. This attitude determined numerous poetics of the Baroque, such as by M. Opitzin his “Buch von der deutschen Poeterey” (1624), by J. G. Schottel (“Teutsche Sprachkunst”, 1641, expanded 1651), P. von Zesen (“Deutsches Helikon…”, 1640) and G. P. Harsdörffer (” Poetischer Trichter… «, 3 volumes, 1647–53).

The social impact of Opitz’s reform work can be seen in the efforts of the linguistic societies: the »Fruchtbringende Gesellschaft« (founded in Weimar in 1617), the »Sincere Society of the Firs« (founded in Strasbourg in 1633), the »Elbe Swan Order« (founded in 1658, probably in Wedel, Holstein).

The »poet circles« or »poet schools«, which inter alia, came into contact with the intentions of the linguistic societies. in the Nuremberg poets’ circle of the “Pegnesisches Blumenordens” (with Harsdörffer, J. Klaj and S. von Birken as the most important members) and in the Königsberg poets circle (“The musical pumpkin hut” with S. Dach and H. Albert).

In addition to the goals of language reform, language education and protection of the mother tongue from foreign influences, v. a. the “art of translation” as a preschool for independent poetry. With his translations of the »Trojans« by Seneca the Younger (1625) and the »Antigone« by Sophocles (1636), Opitz created patterns for the drama: tragedy assumed the leading role in poetry, its moral purpose was emphasized; the class clause was taken over from Renaissance poetics, and the Alexandrian, borrowed from French tragedy, became its meter.

The baroque age sought its poetic representation in drama, the baroque theater served for amusement, homage and the spread of faith. The most important author of German baroque drama is A. Gryphius; the Silesian Protestant found his own form of the martyr’s drama, which is characterized by Protestant confidence in faith and the idea of ​​”vanitas”, the complaint about the transience of the world (including “Leo Armenius”, 1650; “Catharina of Georgia”, 1657).

The courtly drama D. C. von Lohenstein, which defines the world, stands out from Gryphius, who also founded the new German comedy in his “Scherz- und Schimpfspiele” “Absurda comica or Herr Peter Squentz” (1658) and “Horribilicribrifax” (1663) and unmasked their doings from the cynic’s point of view (including »Ibrahim Bassa«, written in 1650, printed in 1685; »Sophonisbe«, 1680). C. Weise followed a more didactically oriented line of the baroque drama, while the comedies C. Reuters aimed at satire.